iOS 10: What is Bigger, Bolder, and more Brilliant Makeover 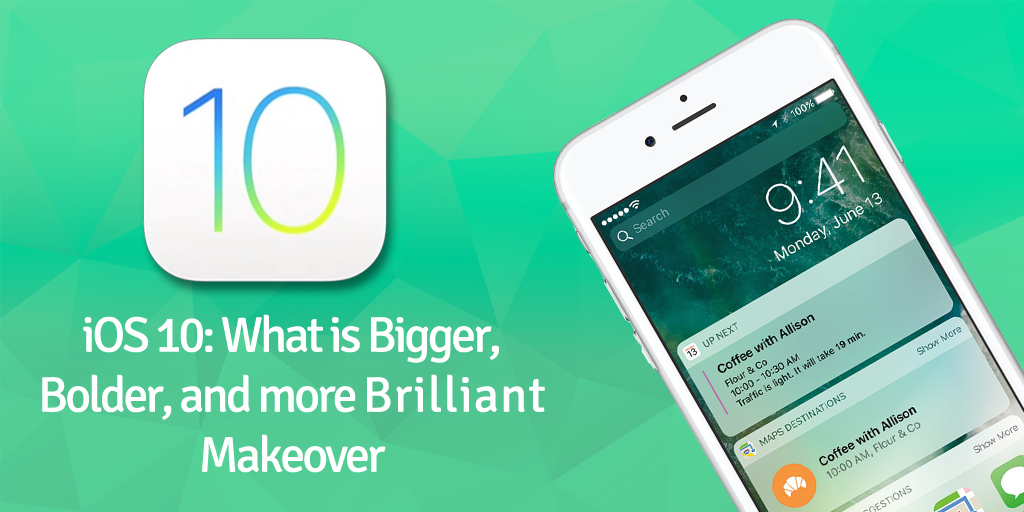 So, what really is new and so exciting in iOS 10 that is making the headlines?

Well, for one, Apple has intended the iOS 10 to be more open, lucid and interactive. Unlike in its previous releases, Apple has truly taken user friendliness with some sincerity, and in the opinion of some of the experts, acknowledged the fast growing popularity and great UI offered by Android and Google.

Let’s find out the specific features that Apple has notched-up with iOS 10:

Design: iOS 10 comes with more lucid and consistent design, elevating the whole user experience. The overall look and feel of iOS 10 is far superior and engaging than its predecessors.

Apple Maps: A prominent uplift in the iOS 10 is its new super cool Apple Maps, which comes with a useful feature that automatically pins the location where you stop during a journey. This makes it super convenient to pick up from where you stop to move towards your destination – without having to resetting the route!

Enhanced in its appearance, Apple Maps in iOS 10 also enables users to search for various locations / service providers while travelling.

Third Party App Integration: Apple has finally realized the importance of connecting with third-party apps to give its user a holistic experience. So now when you are travelling using Apple Maps, you not only get to know about the various things enroute, you also get an option to access these – for example, you can book an Ola cab directly from the Apple Maps!

Easy Notifications: With iOS, Apple has launched card-style notifications, helping users to receive and send notifications and messages on their home screen – without having to open the messaging app! All this is possible due to a smart peep and pop 3D touch feature.

Smarter Siri: The voice-based digital assistance system has been made much smarter with the iOS 10. It is more interactive, intelligent and dynamic. For instance, you can even make cash transactions by simply ordering Siri!

Not just that, there are a host of services such as ordering a pizza or calling a cab that you could now do by verbally commanding the voice-based assistance system.

Raise to wake: Pampering Apple users further, iOS 10 enables them to simply pick up the phone to light up the screen and show various notifications!

Responsive Keyboard: With the Quick-type keyboard feature, iOS 10 enables users to quickly respond to messages with specific ready to use responses. For instance, someone asks your location then the system will automatically give you an option to share your location.

There are other super attractive features in the new iOS 10 such as more expressive messaging system with new emojis and fun stickers, ability to remove stock apps, as well as facial recognition photo app that optimizes on advanced facial and objects recognition algorithm to sort your photo gallery and the artificial intelligence to create photo albums and movies.

While there is a rising debate on the authenticity of ideas used in Apple iOS 10 as many features are ostensibly inspired by Google and Android, Apple users do have a real treat in the offing with iOS 10 as it becomes more secure, fun, interactive and above all, open to include other apps and services.